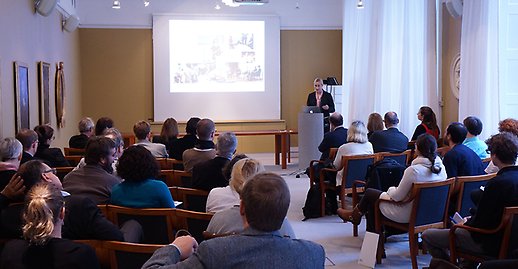 The French-Swedish Research Day is dedicated to the scientific cooperation between France and Sweden. This year's event was held on 27 October at The Royal Swedish Academy of Sciences in Stockholm. The Young Academy of Sweden’s Chair Camilla Svensson presented the Academy at the seminar.

The theme for this year’s French-Swedish Research Day was the 350th anniversary of the French Académie des sciences. The Young Academy of Sweden’s member Helena Filipsson, professor in quaternary geology, contributed with a talk about a French-Swedish research project involving “culturing of Swedish micro-organisms in French aquaria”. Guests of honour were Pascale Cossart, professor in microbiology at Pasteur Institute and Permanent Secretary at the French Académie des sciences, and Christina Moberg, professor in organic chemistry at The Royal Institute of Technology and President of the Royal Swedish Academy of Sciences.

The 19th edition of The French-Swedish Research Day was arranged by Institut Francais de Suède. The event is open to French researchers active in Sweden, Swedish colleagues involved or interested in contacts with France, researchers who would like to join and meet new partners, or curious researchers interested by the presented topics. The event offers the opportunity to meet in a friendly atmosphere and learn new things from all fields of research. After the seminar the participants are welcome to stay for a drink and mingle.

In 2013 the Academy convened in Paris for its first meeting abroad. The meeting included visits to Centre Culturel Suedois, Institut Pasteur and UNESCO. We had the privilege to interact and discuss with French young scientists and highly placed decision makers and civil servants.

In 2014 a YAS delegation visited scientists and prominent research institutions in Paris, thanks to support from the French Embassy in Stockholm. The programme included visits to e.g. Academie de Sciences, the Ministry for Higher Education and Research and Université Paris-Saclay. The delegation was also invited to attend the “For Women in Science” events, including the prize ceremony of the L’Oréal-UNESCO For Women in Science Awards 2014. A visit to the L’Oréal Research Centre was also included.