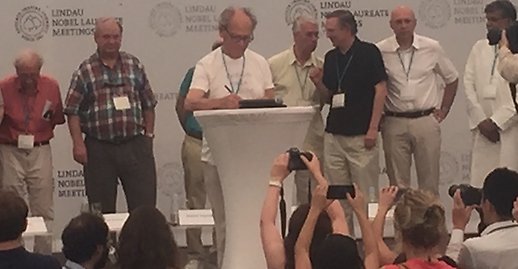 During the Lindau Nobel Laureate Meetings for 2015 the Academy’s mentor and scientific patron Torsten Wiesel signed a petition on climate change.

On 3 July 2015, the final day of the 65th Lindau Meeting, 36 Nobel Laureates signed the Mainau Declaration 2015 on Climate Change, an emphatic appeal for climate protection. It states that

“the nations of the world must take the opportunity at the United Nations Climate Change Conference in Paris in December 2015 to take decisive action to limit future global emissions.”

The text of the declaration is available in all 6 official languages (Arabic yet to come) of the United Nations and in German.

Young Academy of Sweden’s Anna Sjöström Douagi (CEO) was invited to participate in the Lindau Nobel Laureate Meetings for 2015. For this year’s meeting a record number of Laureates and young scientists from nearly 90 countries participated. It was the fourth interdisciplinary meeting, bringing together Nobel Laureates and young scientists from the fields of physiology/medicine, physics, and chemistry.

Held for the first time in 1951 the Lindau Meetings established themselves as a platform for the dialogue between different scientific generations. For 60 years now Laureates as well as young and promising Young Researchers are meeting once a year in Lindau.