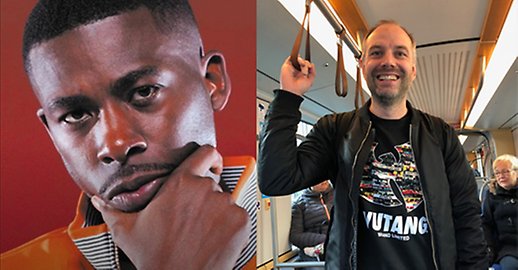 Genius and genius: Hiphop legend and promotor of science, GZA / The Genius, and Robert Lagerström in Wu-Tang Clan tee on his way to the film festival A Better Tomorrow he arranged with Aase Högfeldt in Gothenburg this fall. Photo: press image GZA / The Genius, Young Academy of Sweden

Press release: Swedish computer scientist and young academy member Robert Lagerström, fan of Wu-Tang Clan (WTC), combines film, music and research in a project for children and young adults named A Better Tomorrow. The title and theme is inspired by the WTC's -97 song. This Saturday, WTC's member GZA/The Genius performs in Stockholm. The Genius also promotes science to young people since almost a decade, most recently with his Netflix series Liquid Science.

IT researcher and tech entrepreneur Robert Lagerström is also member of the Young Academy of Sweden, in a new kind of academy; a platform for a selection of prominent young researchers from different fields; from music and psychology to physics and astronomy. Through the Young Academy of Sweden, Robert runs the film project A Better Tomorrow for children and young adults, to promote science and research.

In collaboration with Aase Högfeldt, founder and artistic director of LadyBug Festival

External link, opens in new window., the project has arranged film festival events for children and young people in Stockholm and Gothenburg, and moreover a short film competition where the winning contribution will be shown at the children's and youth film festival, BUFF, in Malmö on March 26

The WTC's -97 song title A Better Tomorrow is both the title and theme of the film project. This Saturday, WTC member GZA / The Genius plays in Stockholm

External link, opens in new window., and Robert Lagerström, who is a long time WTC fan, will be there.

- Movies and music are fantastic door openers to conversations about research with young people, says Robert Lagerström, and something I think research has in common with the WTC and GZA's music is smart content.

The Genius a Harvard lecturer; obvi'

Over the past decade, GZA / The Genius has been giving lectures at universities such as Harvard University (where Robert Lagerström is a guest researcher), and also at schools in his hometown New York, to inspire students and help interest them in science and technology. GZA / The Genius is also launching Liquid Science, a new TV series on Netflix

External link, opens in new window., where he travels around the world and meets with different researchers and finds out how modern science has transformed our lives.