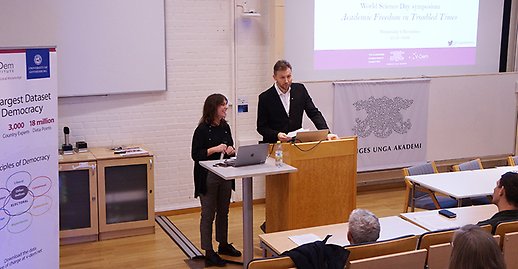 In time for the World Science Day the symposium Academic Freedom in Trobled Times took place in Gothenburg on 6 November. V-Dem institute presented the current democracy status with regard to researchers's situation, a worrysome third wave of autocratization is happening. Threantened researchers shared their experiences and Scholars at Risk presented strategies.

– The symposium showed that Sweden can become better at promoting academic freedom, among other things by developing the support for internationalization. E.g. researchers who have been forced to leave their universities due to threats or risks, should still be able to be recognized as legitimate partners in research funding applications, says Mia Liinason, Professor in Gender studies and Member of YAS.

Academic freedom is shrinking as a part of the ongoing trend that includes the rise in populism and political oppression. Being a vital part of democracy, the ability of universities to pursue research questions freely must be defended. Some countries and research topics are currently hotspots, receiving more pressure than others. At the World Science Day symposium, the ongoing challenges to academic freedom were scrutinized and discussed.

– Universities are an engine of social development, and threats to the freedom of academics are affecting many parts of society. It's a concern for everyone! Jonas Olofsson, Professor in Psychology and Member of YAS, emphasized.

The World Science Day for Peace and Development

External link., celebrated every year on 10 November, was established by UNESCO in 2001 with the aim of highlighting the important role of science in society and the need to engage the wider public in debates on emerging and important contemporary issues relevant to science. In 2018 the Young Academy of Sweden arranged the symposium The Shrinking Academic Freedom in Europe

External link. together with the The Swedish National Commission for UNESCO.