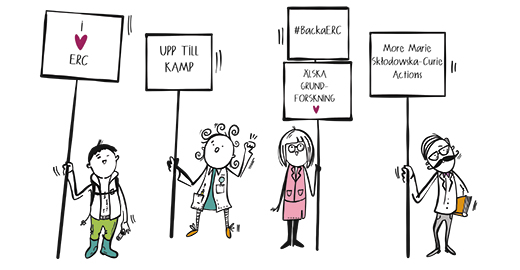 You have probably heard that the proposed long-term budget for EU includes cuts in the budget for the European Research Council (ERC). The long-term budget was negotiated this summer by member states and is now debated in the EU Parliament. Jean-Pierre Bourgionon (president of the ERC) held a speech

for the parliament on September 7 and the parliament will soon vote on the budget as a whole. Now is your last chance to protest! A petition has previously been circulated and signed

broadly across Europe, but this time we will focus directly on the Swedish members of the national and European parliament.

Help us write to politicians to point out that the cuts in the EU long-term budget will implicitly (and unintentionally it seems) lead to a major reduction of the budget for ERC – the jewel in the crown when it comes to EU-funding for research. If many of us write to our politicians they may listen. Write to one, or several, members of parliament and ask your colleagues to join too!

We know time is limited and to make it as easy as possible we provide a draft e-mail that you are free to use. The draft is available here

(link to template). E-mail addresses for Swedish members of the European parliament are available here

and to members of the national parliament here

When you have written to one or several politicians, please tweet about it and use the hashtag #backaERC. This way we hope to amplify the message.