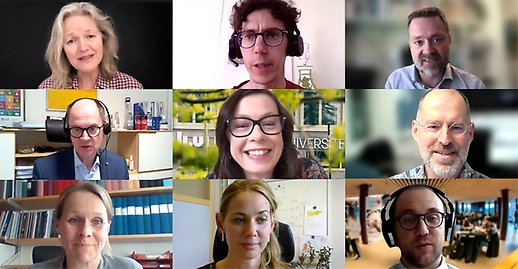 With the aim to discuss career paths for younger researchers, the Young Academy of Sweden and Junior Faculty LiU arranged a well-attended webinar at Linköping University on May 20. The webinar is now available on video.

The live webinar was recorded, see it here.

Improved career paths for younger researchers are an ever-current issue for the Young Academy of Sweden (YAS). YAS has been a strong advocate for a clear and transparent career system that has the position of assistant professor (BUL) at its heart.

On the initiative of the Vice-Chancellor Jan-Ingvar Jönsson, Linköping University (LiU) has initiated a process of reviewing and strategizing its’ career structure. Several open webinars have been held during the spring to discuss career paths and strategies at LiU.

After moderator Karl Wennberg, professor in Business Administration at the Department of Management LiU and YAS member, welcomed everybody, professor Joanna Rosén, professor in Thin film physics LiU and YAS member, gave a presentation of the Young Academy of Sweden and our activities, with a special focus on our work on promoting career paths for young researchers, including our evaluation of Assistant Professorships in Sweden

She was followed by Dr. Jose Gabriel Martinez Gil, Assistant Professor in Sensor and actuator systems at the Department of Physics at LiU, and representative for the Junior Faculty at LiU

External link, opens in new window. board. He presented the Junior Faculty’s work and why young researchers at LiU should join JF. He particularly pointed out the interaction with other junior researchers as an important factor, the exchange of ideas and support across faculties that one can find.

Vice-chancellor Jan-Ingvar Jönsson gave a presentation of Linköping University. He also shared the story about his own career path and pointed out that the research environment where you work is crucial. He went on to talk about the strategy project that he has initiated that aims to shape the LiU of the future. The take home message from the initial work is that the big challenge, and key factor for success, is recruitments, recruitments and recruitments.

After a short break the Deans for all four faculties at LiU reflected on, amongst other things, how the career structure and strategy is implemented at the different faculties from a more practical point of view, challenges they see, and the most important steps to keep in mind for a young researcher who wants to pursue a career at LiU.

Professor Lena Jonasson, Dean of the Faculty of Medicine and Health Sciences pointed out that even if the passion for science is the most important part, the ability to survive in science can also be learnt. It’s about grants writing support, how to enhance your communication skills, to create networks. This should start early, already at the PhD level, but there should also be some sort of structured career support system for the assistant professors.

Karin Axelsson, Dean of the Faculty of Arts and Sciences pointed out that a career is nothing that just happens, you can make informed choices that increase the possibility to succeed. Her advice for younger researchers was to not only get to know the system, but to really understand it. Read the promotion criteria, the employment regulations etc., and try to translate them into what they mean in your specific discipline and discuss them with senior colleagues. The rules of appointment at LiU can be found here

Håkan Löfgren, Dean of the Faculty of Educational Sciences identified that a challenge for younger researchers at his faculty is to get external funding. His advice was to actively try to join the research community, to get involved in formal and informal networks and build contacts. Get advice on, and be part of, applications at an early stage.

Johan Ölvander, Dean of the Faculty of Science and Engineering, pointed out that an important factor to succeed as a researcher is to show your independence. Publish papers without your supervisor, show that you can attract funding. But he also stressed the importance of being active in the scientific community, which can mean very many things - go to conferences, organize workshops, review papers. But don’t forget to invest time in the pedagogical part as well.

Among many other things, the panel also reflected on teaching and research and how to combine the two. How different faculties face different challenges in terms of finding time and opportunity to get involved in one or the other. The take home message from Vice-chancellor Jan-Ingvar Jönsson to the faculties was to focus on the research environments.

In the end, the final advice to young researchers from a unanimous panel was to remember the passion for science!

Sara Liin, Associate Professor of Neurobiology at the Department of Biomedical and Clinical Sciences and YAS member closed the webinar by concluding that it was impressive how broad the span of the discussions had been – from visions for the future, to hands on advice – and that hopefully the discussions will continue in the coffee room and in different boards, and that we can re-unite again soon.