The aim of my research is to understand which are the smallest building blocks of matter and which are the fundamental forces that act on them. Our current theory of the subatomic world, the standard model, is extremely successful but needs to be made more universal to e.g. include gravity and explain the origin of the dark matter in the universe. With data from the ATLAS experiment at CERN's Large Hadron Collider I search for elementary particles that are predicted by various possible extensions of the standard model. One such extension is supersymmetry in which each standard model particle has a supersymmetric partner and the lightest supersymmetric particle could constitute the dark matter. 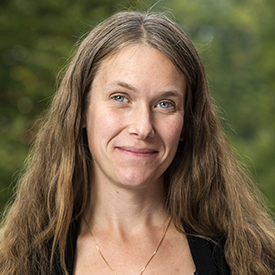 Born: 1977
Family: Husband and two kids born 2010 and 2012 respectively
Interests: Politics, horse riding, the summerhouse on Gotland and all sorts of pottering.