What we think of as normal matter only accounts for less than 5% of the Universe: the rest is unseen dark matter and dark energy. Jan Conrad wants to detect dark matter, which would be a breakthrough in physics and open up a whole new view of the Universe.

While scientists can easily see the matter that makes up humans, our planet, and even other solar systems, dark matter remains invisible to conventional telescopes and other techniques. In his search for dark matter, Jan Conrad will look for an elementary particle called Weakly Interacting Massive Particles, or WIMPs, which scientists think are a kind of dark matter.

Astrophysicists hypothesize WIMPs have existed since the Universe was very young, but no one has detected them yet. Conrad will search for indirect signs of WIMPs: gamma rays, a form of high-energy radiation that is released during collisions between WIMPs, or as the particles decay.

Conrad will start his search using existing telescopes that can detect gamma rays aboard a satellite called FERMI, as well as arrays of telescopes on the ground. To improve the chances of success, he is also involved in the development of a new ground-based European telescope array specifically intended to detect gamma rays. 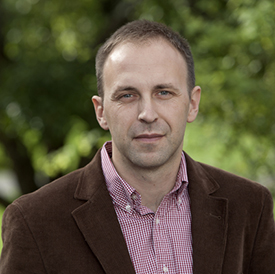