Researcher in Experimental Particle Physics at the Royal Institute of Technology

In particle physics we strive to explain the smallest constituents of matter that build up out universe, and their interactions. We have an incredibly successful theory, called the Standard Model, which explains with incredible precision how everything around us is built up of neutrons and protons formed from quarks, and electrons. But despite its success, the model only explains about 15 % of all matter in the universe. The rest is made up of a mysterious dark matter which we still know very little about, except that its gravitational pull played a crucial role in the early evolution of the universe, and today holds together our galaxies.

My research with the ATLAS experiment at the CERN laboratory outside Geneva concerns trying to find new particles that could make up this dark matter. In a 27-km circular tunnel 100 m under ground, the Large Hadron Collider accelerates protons to 99.999999 % of the speed of light in both directions. The beams collide head on to enable studies of the physics that governs the smallest building blocks of matter at the highest energies possible today, and hopefully create new hitherto unobserved particles. The processes and particles of interest are rare and out of one billion collisions happening every second, approximately 1000 are selected in real time for further analysis. This is large-scale fundamental research and today's experimental collaborations involve several thousand people from all over the world and last for decades.

An animation showing a collision where a Higgs particle is created in the ATLAS-experiment.

Christian Ohm at the Royal Institute of Technology 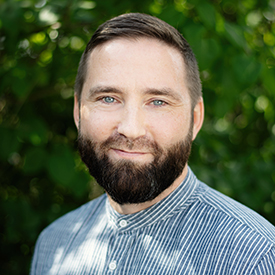 “I want to work to improve and make the career paths more clear for young researchers in Sweden. Are you a young researcher with suggestions for what can be improved, please contact us – we represent you! I also want to contribute to widen young people's image of who are and who can become a researcher; and to make higher education and research careers a visible alternative for young people even from areas and backgrounds with less academic traditions and expectations. My experience is that basic research questions have the ability to unite people from all over the world, and I think we could do more to exploit it at community level. Through the Young Academy of Sweden, I get tools, resources, valuable perspectives, contact areas and a unique platform to be able to work more effectively on these issues.”