12-14 August 2015 the annual research encounters will take place in Fiskebäckskil! More information on programs, teachers and so on will be published here and on Facebook.

Watch a short video about research encounters, a former student, Boel Nilsson, and one of our teachers Henrik Zetterberg explain (Swedish only). 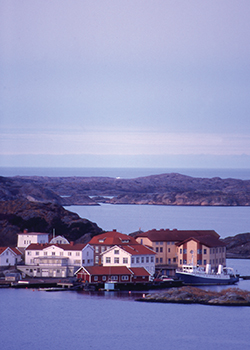 The Young Academy of Sweden’s summer research school, “Research Encounters”, for high school students last took place 13-15 August 2014 in the Sven Loven Centre for Marine Sciences in Fiskebäckskil on the beautiful Swedish west coast. With a focus on the core of research, curiosity and discovery, discussions and field trips are interspersed with lectures and grupparbeten. Research encounters is a 3-day meeting on research for young people who are about to begin their third year of high school and think that research seems interesting, or how a former student put it, “even if you do not think research seems interesting!”. During the meeting, participants meet researchers from the Young Academy of Sweden for stimulating and inspiring discussions about  research, such as:

On the agenda is everything from subatomic physics to the humanities.

The Young Academy of Sweden's Henrik Zetterberg on Research Encounters

- The purpose of the “Research Encounters” is to offer high school students an opportunity to so-called “Defining Moments”; moments or situations where you find out what it is you want to do in life. In the book chapters written by the first generation of the Young Academy of Sweden's members, they have made clear that research interest has often been raised quite early on in life and often because of inspiring meetings with teachers, scientists and other people who somehow opened the door to the scientific community. This is what we want to do. The future will show whether we succeed. If we do so in any case it is absolutely amazing! (Henrik Zetterberg, Professor of Neurochemistry)

22 high school students participated and 7 scientists contributed to the Research Encounters in 2014. Together they discussed research in general with questions like: What is good research? In what way can and should scientists communicate? What is most important in research: width or depth? Can you prove something? What can you gain by cooperating across disciplinary boundaries? How do you know when you are wrong?

A boat trip across Gullmarsfjorden to Lysekil with a guided tour of the Mediterranean house Hanns were also included, and a study tour on Gullmarsfjorden with one of the station's research vessels and a visit in the marine lab, also with guides.

Research Encounters are free and drug-free. Travel to and from the summer research school will be reimbursed up to a certain amount.
For Research Encounters financial support is provided by The Swedish Foundation for Humanities and Social Sciences