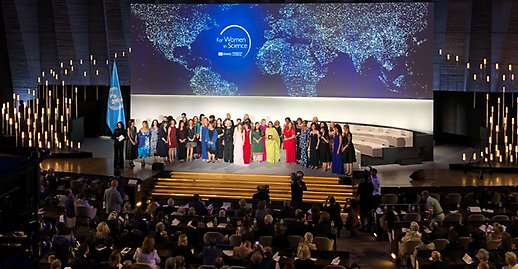 At an international ceremony at UNESCO's headquarters in Paris on 23 June, a cascade of the world's most prominent women in STEM research was celebrated when the L’Oréal-UNESCO For Women in Science Awards for 2020, 2021 and 2022 were presented. Beatriz Villarroel was the first Swede ever to receive the International Rising Talent award. 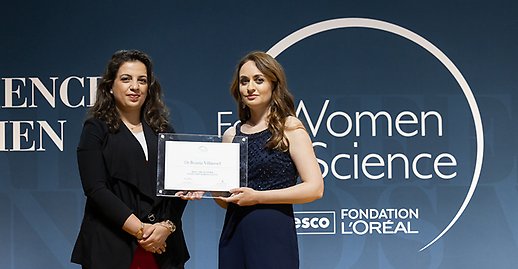 Beatriz Villarroel receives her award at the ceremony of L’Oréal-UNESCO For Women in Science (FWIS) International Rising Talents on 22 June. Photo: L'Oréal Foundation.

Beatriz Villarroel is a researcher in astrophysics at Nordita and Stockholm University. She is one of 15 researchers from around the world selected for the L’Oréal-UNESCO For Women in Science (FWIS) International Rising Talents program

External link, opens in new window.. In 2021, Beatriz received the national L’Oréal-Unesco For Women in Science award with the support of Sweden’s Young Academy, which enabled a nomination for International Rising Talents (IRT).

Beatriz Villarroel and mathematician Alicia Dickenstein (FWIS Award 2021) mingle at the reception after the UNESCO awards ceremony. Photo: SUA 2. Posters session, Beatriz Villarroel presents the research project Vanishing and Appearing Sources during a Century of Observations: VASCO, where she is the Principal Investigator. Photo: L'Oréal Foundation. 3. Francoise Combes and Beatriz Villarroel, in the background to the left, Jean-Paul Agon, Chairman of the Board of L'Oréal Group. (Click to enlarge images.) Photo: YAS

It was a fantastic and memorable week! Among the other IRT awardees, I got to know some incredibly inspiring researchers with whom I also felt a strong connection. The first three days we were at a villa outside Paris, and were pampered with French gourmet food, while we participated in a course in leadership. This was followed by three days of festivities in Paris, where we had two beautiful ceremonies. Now I look at the photos I took during the week, and feel a huge gratitude that I got to be part of this. I highly recommend applying for the award, says Beatriz Villarroel.

The recipients of the IRT receive a prize amount of € 15,000 and participate together in Paris in a career program specially designed for researchers aiming at the highest level. They also got to participate in activities with FWIS Award laureates, such as the poster session and the subsequent mingling with the recipients of the FWIS Award at the award ceremony at UNESCO's headquarters. A wonderful week for ambitious researchers!

The Swedish For Women in Science Prize

Beatriz received the 2021 national FWIS Award ”for her unique ability to link astronomy, artificial intelligence and civic research to identify missing light sources in the night sky.” There are 52 national and regional FWIS programs that award around 260 prizes (China awards 10 national FWIS of SEK 150,000, the USA awards 5 prizes of SEK 550,000). The upcoming Swedish prize will be awarded in 2023, the call for application is open June 15 - September 27.

L'Oréal-UNESCO For Women in Science Award 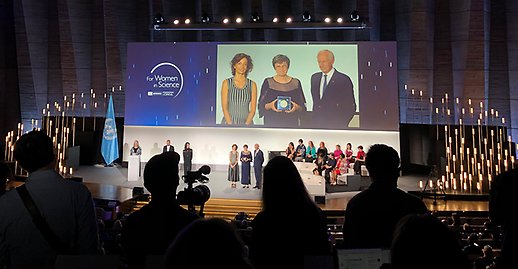 Katalin Karikó receives the FWIS Award 2022 ”for her groundbreaking development of a non-inflammatory mRNA, which can be a potent vaccine and is essential for recently producing effective COVID-19 vaccines”. The award was presented by Audrey Azoulay, Secretary-General of UNESCO, and Jean-Paul Agon, Chairman of the Board and Chair of the Strategy and Sustainability Committee of the L’Oréal Group. Photo: SUA

External link, opens in new window. are awarded each year, every two years in life and environmental sciences and every two years in physics, mathematics and computer science. Laureates are nominated from each of the five major continents: Africa and the Arab States, Asia and the Pacific, Europe, Latin America and the Caribbean, and North America. Among the FWIS Award Laureates awarded at the ceremony were Francoise Combes, an astrophysicist, who received the 2021 award for "her outstanding legacy in astrophysics which ranges from the discovery of molecules in interstellar space to supercomputer simulations of galaxy formation.” A Lauretate with a Swedish connection is the Argentine mathematician Alicia Dickenstein, who with support from Knut and Alice Wallenberg's mathematics initiative

External link, opens in new window. has been a visiting professor at the Royal Institute of Technology. Dickenstein received the FWIS Award 2021 for ”her outstanding contributions at the forefront of mathematical innovation by leveraging algebraic geometry in the field of molecular biology.” One of the 2022 Laureates who is of high current interest is Katalin Karikó, who was awarded “for her groundbreaking development of a non-inflammatory mRNA, which can be a potent vaccine and is essential for recently producing effective COVID-19 vaccines. Her work has paved the way for future therapies in complex diseases such as cancer, heart failure, stroke, anemia and autoimmune diseases.”

The world needs science, science needs women: this is the conviction of L’Oréal-UNESCO For Women in Science (FWIS), which was established in 1998 to promote women in science, technology, engineering and mathematics. The purpose is to reward and make them more visible, to make their talent known and inspire careers for future generations. The initiative operates at several levels, the highest of which is the FWIS Award and rewards senior prominent researchers, several of whom later received the Nobel Prize.

At national and regional level, early career researchers are awarded. Swedish FWIS has been awarded since 2016 by the Young Academy of Sweden, L’Oréal Sweden and the Swedish UNESCO Council. National and regional FWIS Prize winners can then be nominated for the FWIS International Rising Talents.