Associate Professor in History of Science and Ideas at Uppsala University

My research concerns encounters between experts and the people they are experts on – such as Deaf people and teachers of the deaf, or physicians and patients. Interesting things often happen when they meet: sometimes, conflicts arise when the experts are challenged by their human ”study objects”. On other occasions, they form alliances and pursue common goals. In every instance, however, there is some sort of negotiation between them about knowledge and power. Who knows best about a disease – the person experiencing it, or the doctor? What counts as relevant knowledge, and who gets to participate in discussing it? Studying negotiations like these that have taken place during the past 150 years can help us to better understand today’s battles over truth and knowledge.

Among the cases I am currently studying, is what was probably Europe’s first patient organization, formed in 1897 on the North Sea island Heligoland. Wealthy hay fever sufferers sought refuge there during the pollen season, and formed a club that engaged in research on their at the time still controversial diagnosis.

Ylva Söderfeldt gives a lecture at the KU Leuven University, Belgium in 2013: Understanding disability with Habermas and vice versa: The German Deaf movement and the public sphere. 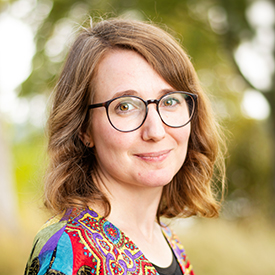 “I have a great interest in collaboration and communication across discipline borders, both in my research and in my teaching. Through the academy I look forward to establish more contacts within other subjects and also work for a university landscape where more interdisciplinary exchanges take place.”